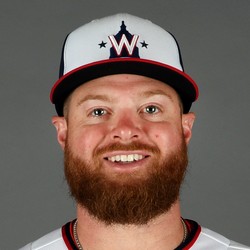 Reliever Aaron Barrett will undergo surgery on his elbow, according to Nationals manager Matt Williams.

This will most likely keep Barrett out of action for 2016. In two seasons, Barrett made 90 appearances, going 6-3 with a 3.47 ERA as he struck out 84 and walked 27. The 27-year-old righty was outstanding in his rookie year but less successful in 2015.

The Nationals placed reliever Aaron Barrett on the 15-day DL with a right biceps strain. After throwing a ball wildly, Barrett came out of last night's game with a trainer. The Nats activated reliever David Carpenter (acquired from the Yankees).

Rose Ingberman5 years ago
Aaron Barrett gets key out against Mets

Aaron Barrett came into a 1-0 game with two runners on base and two out. He struck out Michael Cuddyer to preserve the lead for the Nationals.

Aaron Barrett used his 97 mph sinker to good effect as he retired the first two batters in the eighth inning to preserve a 1-0 lead for the Nationals.

Manager Matt Williams does not appear to have established regular 7th and 8th inning setup roles, instead going for matchups. Expect Barrett to accumulate holds (and even saves).

In relief of Stephen Strasburg, Aaron Barrett entered the sixth inning with two on and one out. He retired the next two hitters (one strikeout) to earn the hold.

Barrett (ERA 1.74), a key member of the Nats' bullpen, is being used in high-leverage situations.