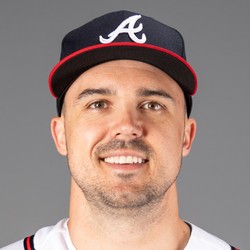 Adam Duvall went 1-for-2 with a run scored in Wednesday's game against the Twins.

Duvall is another brave who has had a solid spring, hitting .310 thus far. He will very likely be one of the five outfielders the team will roster to start the season.

Adam Duvall went 1-for-2 with a 2-run double, a walk, and a run scored in Saturday's spring game against the Rays.

The Braves' outfield is pretty crowded and the team will have to make some decisions soon. Duvall was sent down to Triple-A during the season last year and made tremendous improvement, even helping the major league team in the postseason. The current situation leads some to think the team will go with five outfielders to start the season. Duvall should indeed be one of those five, but we'll see.

Braves outfielder Adam Duvall went 1-for-3 with a solo home run in Thursday's win over the Reds. The homer was his fifth of the season.

Duvall has five home runs through his first six games with the Braves, including four in his last three games. He is batting an excellent .480 through 25 at-bats as he continues to take playing time away from the ice-cold Austin Riley.

Braves outfielder Adam Duvall went 4-for-5 with two home runs and three runs scored in Tuesday's win over the Nationals. The homers were his second and third of the season.

In four games since being called up, Duvall is hitting .529 with three home runs, five runs scored, and five RBIs as he has been starting over the struggling Austin Riley. He probably doesn't have long-term staying power, but he is worth a short-term flyer in deeper leagues at this point.

Adam Duvall has avoided arbitration by agreeing to a one-year contract worth $2,875,000.