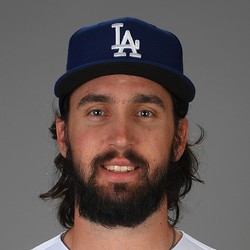 Tony Gonsolin struck out three over two scoreless innings in Tuesday's win over the Padres.

Gonsolin followed Rich Hill's two scoreless innings with two of his own. He keeps oscillating between the rotation and bullpen but is expected to pitch in relief once the playoffs start. The 25-year-old rookie owns a 3.00 ERA in 39 innings this year.

Gonsolin struck out five and walked three as the Dodgers went on to lose 5-4. The right-hander has now given up just five earned runs over his last 24 innings. He doesn't usually pitch more than five innings, but Gonsolin will still be a nice streaming option for his next matchup against the Giants.

Gonsolin was filling in for Hyun-Jin Ryu and actually carried a no-hitter into the fifth inning before serving up a double to Kolten Wong. It was an impressive start for the 25-year-old, who walked just one. It’s unclear if he’ll make another start, but Gonsolin could have some streaming appeal if he stays in the rotation.

Tony Gonsolin took the loss in his major league debut on Wednesday in Arizona, giving up six runs (four earned) on six hits over four innings.

The 25-year-old struck out three and didn't walk anyone. Things got off to a rough start when he allowed four runs in the first. The right-hander has a 2.77 ERA in Triple-A this season and will likely head back to the minors to continue working on things.