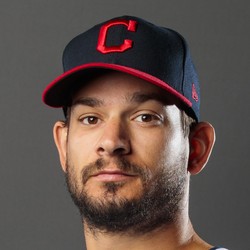 Cleveland Indians closer Brad Hand threw a scoreless inning in an 11-7 Cactus League win over the Giants on Monday. Hand struck out one and walked one.

Hand has allowed just one run over five innings this spring. The veteran closer had a rough second half last season but the team believes he will bounce back in 2020. Hand is a top-10 fantasy reliever this year.

Matthew Terelle18 weeks ago
Brad Hand gets MRI on Wednesday

Cleveland Indians left-hander Brad Hand was sent back to Cleveland on Wednesday for an MRI. Adam Cimber picked up the save against the Angels in Hand's absence.

The team hasn't indicated what Hand's injury is, although they did report that the MRI came back clean. Supposedly Hand wasn't bouncing back after throwing the way he normally does. The team is expected to continue to evaluate Hand but he appears to be okay.

Matthew Terelle44 weeks ago
Brad Hand picks up 34th save

Cleveland Indians left-hander Brad Hand pitched a scoreless ninth inning in a 5-2 win over the Twins on Sunday. He struck out one and walked one.

Cleveland Indians closer Brad Hand gave up two runs in the ninth inning of an 8-6 win over the White Sox on Wednesday. He got just one out in the frame.

It wasn't a save chance when Hand entered, as the team was trying to get him some work. He promptly gave up a two-run homer and was replaced by Nick Wittgren, who converted the save. It has been a shaky month for Hand, who was one of the best closers in baseball over the first half of the season.

Cleveland Indians closer Brad Hand threw a scoreless ninth inning to preserve a 2-0 win over the Tigers on Thursday. Hand struck out one in the frame.

Hand has righted the ship after a rough patch in the middle of the month. He has converted three saves since Saturday, giving him 33 on the season. He is back to being one of the better fantasy closers in the league.

Matthew Terelle45 weeks ago
Who Should I Draft?
Do Not Sell
Are you looking to contact Customer Support about a subscription or account related question?
Yes
No, I'm a California resident looking for the California Consumer Privacy Act form