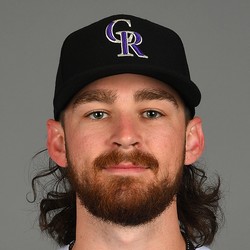 Rodgers underwent right labrum surgery last year and the plan was for him to only serve as a DH in Cactus League games. However, it now appears that he could see some action in the infield before all is said and done. The 23-year-old could wind up taking the Rockies' second base job later this summer. We certainly expect him to start the year in the minors, however.

Brendan Rodgers (shoulder) isn't expected to be a major-league option for the Rockies until mid-May.

Rodgers suffered a labrum tear last July and will be brought along slowly throughout the spring. The former elite prospect struggled during his brief time in the majors last season. However, he could be a very interesting "post-hype sleeper" if he gets healthy by the summer.

Brendan Rodgers (shoulder) says that his rehab is "on track" and that he hopes to be 100% by spring training.

Rodgers underwent surgery for a torn labrum in mid-July and expects to be cleared for baseball activities in about a month. It's good news but his role with the Rockies is completely up in the air entering 2020 - even at full health. Rodgers hit just .224 without a homer in 25 games with the big league club this past season. He has massive fantasy upside if he ever puts it all together and gets everyday playing time.

Brendan Tuma - Too Much Tuma20 weeks ago
Brendan Rodgers (shoulder) undergoes surgery, out for season

Brendan Rodgers underwent labrum surgery on Tuesday morning that will sideline him for the remainder of 2019.

Rodgers was placed on the IL in late-June with a shoulder impingement, but the injury was obviously more severe than that. The rookie shortstop made his big league debut this year and played 25 games for Colorado, but ultimately disappointed with a .522 OPS. Rodgers will also enter the 2020 season still searching for his first big league homer. If his recovery goes well, however, Rodgers could wind up being an interesting post-hype sleeper.

The Rockies placed Brendan Rodgers on the 10-day injured list with a right shoulder impingement.

The 22-year-old rookie first felt the issue over the weekend and will need at least a week longer to recover. Rodgers was in line for more playing time with Trevor Story currently sidelined, so the injury comes at a bad time.