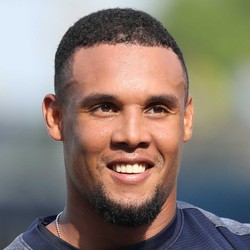 Mets outfielder Carlos Gomez went 2-for-4 with a solo home run in the second game of Tuesday's doubleheader against the New York Yankees. The homer was his third of the season.

Gomez is batting just .227 on the year but has now homered twice in his last three games to raise his batting average up from .182.

Mets outfielder Carlos Gomez went 2-for-4 with a two-run home run in Saturday's win over the Colorado Rockies. The homer was his second of the season.

Despite Saturday's performance, Gomez is still hitting just .203 on the season and had been riding an 0-for-11 skid heading into the game. For now, he is only relevant in deeper NL-only leagues and leagues with deep rosters where he can be hidden on the bench.

Mets outfielder Carlos Gomez went 2-for-3 with a three-run home run, a walk, stolen base, and two runs scored in Thursday's win over the Washington Nationals. The homer and steal were both firsts this season.

Gomez is getting an opportunity with the Mets thanks to injuries to Jeff McNeil, Michael Conforto, and Brandon Nimmo, and on Thursday he made the most of it.

Gomez will hit sixth in the Mets' order Friday against the host Miami Marlins.

Gomez had his contract purchased from Triple-A earlier Friday, and will look to make a strong impression with the team that originally signed him as a 16-year-old in 2002. The veteran outfielder batted .270 with six home runs, 22 RBIs and five steals in 10 attempts with Syracuse.

Outfielder Carlos Gomez was pulled from Thursday's game at Triple-A Syracuse and was called up to the big league squad on Friday, according to multiple reports. With Michael Conforto suffering a concussion in yesterday's game, Gomez will get his opportunity in New York.

While Gomez is getting his chance due to Conforto's injury, he will have an opportunity to stick with the big league squad if he can produce during this stint. Keon Broxton could be on the chopping block, and Brandon Nimmo has been streaky (and hits left-handed), and Gomez could play his way into a regular role. However, Gomez did not have a good year in 2018 in Tampa Bay but was hitting .270 with six home runs down in Triple-A.