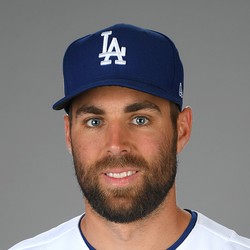 Chris Taylor suffered a setback in his recovery from a sore right forearm Wednesday.

The Dodgers have said that Taylor won't return to game action until he's back to 100 percent. Regardless, Taylor is expected to fill a utility role in both the infield and the outfield for the Dodgers.

Chris Taylor is nursing an irritated forearm and biceps muscles.

Taylor suffered the injuries while checking a swing, and he's missed three games while recovering. He will likely return to game action Thursday.

Chris Taylor (forearm) has resumed hitting in the batting cage.

Taylor continues to recover from a fractured forearm and could start rehab games as soon as this weekend.

Chris Taylor was placed on the 10-day injured list Monday due to a fractured left forearm.

Taylor was hit by a pitch on his left wrist in the 12th inning of Sunday’s game against the Red Sox. It’s been revealed to be a broken forearm and no timetable has been announced for his return. Considering the seriousness of this injury, he will be out a while. Matt Beaty was recalled from Triple-A Oklahoma City in a corresponding move.