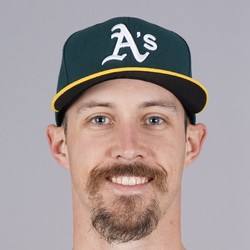 Daniel Mengden was optioned to Triple-A Las Vegas on Friday.

Mengden is the odd man out with the Athletics adding Tanner Roark at the deadline. He owned a 4.85 ERA and 16.8 percent strikeout rate in 55 2/3 innings. If a spot opens up, Mengden would most likely get first crack at it.

Daniel Mengden (5-3) allowed four earned runs on three hits and four walks while striking out five in 5 1/3 innings in Friday's 5-2 loss to the Rangers. He took his third loss of the season.

Brad Camara31 weeks ago
Daniel Mengden wild in no decision

Daniel Mengden allowed four runs on six hits and five walks while striking out two in 3 1/3 innings in Sunday's 7-6 loss to the Twins. He did not factor into the decision.

Mengden had thrown 18 innings in July without issuing a walk but was wild on Sunday. He won four straight decisions before Sunday's game, and his offense did enough to avoid tagging him with a loss. Mengden owns a 4.65 ERA and 36 strike outs in 50 1/3 innings this season. His next start is scheduled for Friday, home against the Rangers.

Daniel Mengden (5-1) allowed one run on four hits and no walks while striking out three in Tuesday’s 9-2 win over the Mariners. He earned his fifth win of the season.

Mengden has now won his last five decisions. Despite the low strikeout totals, he continues to be effective by limiting base runners. He hasn’t issued a walk since his start against the Cardinals back on June 26th. Mengden owns a 4.21 ERA and 1.30 WHIP with 34 strikeouts in 47 innings for the Athletics this season. His next scheduled start is Sunday, away against the Twins.

Daniel Mengden allowed three runs on six hits while striking out two over five 1/3 innings in Sunday's 7-4 win over the Mariners.

Mengden has now won three straight games, and has only walked two batters in his last 19 1/3 innings pitched. He finishes the first half with a 4-1 record along with a 4.73 ERA, 1.43 WHIP and 31:16 K:BB in 40 innings. Mengden is not currently scheduled to pitch this week.