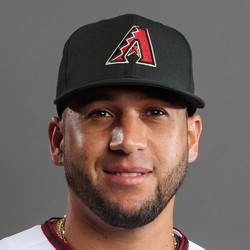 David Peralta will require surgery on his right shoulder and is set to miss the rest of 2019.

Peralta landed on the 10-day injured list Saturday with shoulder inflammation, and will need surgery to correct the issue. He will be shut down for the rest of the season. It’s unclear at this time if he will be ready for spring training.

Peralta has been battling right shoulder problems all season, with this being his third stint on the injured list with that issue alone. He has managed 423 plate appearances as a result of the nagging injury. Tim Locastro was called up to replace Peralta, and will likely split time with Josh Rojas and Jarrod Dyson in the outfield.

David Peralta hit his 12th homer of the season in Arizona's 6-1 win over the Giants on Sunday.

Peralta hasn't hit for as much power this year as he did a season ago, though some of that can be attributed to some nagging injuries he has dealt with. Overall the 32-year-old is hitting .272 with 12 homers and a .797 OPS.

David Peralta went 1-for-6 with a single as the D'Backs fell to the Giants 10-9 in 11 innings on Friday.

Peralta homered earlier in the week but has overall been quiet lately. He was battling a stiff neck back on Monday, so perhaps that is still bothering him a bit. As long as he's healthy we expect him to pick things up shortly.

David Peralta was held out of Monday's game due to neck stiffness.

Peralta was initially in line for a scheduled day off, but it was later revealed that he is dealing with neck stiffness. He is considered day-to-day.