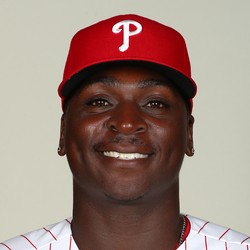 Didi Gregorius signed a one year, $14 million deal with the Phillies Tuesday.

Gregorius will reunite with former Yankees manager Joe Giradi In Philadelphia. He slashed .238/.276/.441 with 16 home runs, 61 RBI, 47 runs scored and two stolen bases across across 382 plate appearances last season. Gregorius will look to bounce back after having a full year to recover from Tommy John surgery. With the Gregorius signing, look for Jean Segura to shift over to second base. Gregorius is a bounce-back candidate after a injury plagued 2019.

Jon Heyman of MLB Network reports Didi Gregorius is "likely" to receive a multi-year contract worth $14-15 million per season.

Heyman adds this might price out the Reds, who like Gregorius but also have Freddy Galvis as a backup. The Phillies are another team that is known to have interest in the former Yankee shortstop.

The Yankees did not extended Didi Gregorius a qualifying offer.

This might actually be a good thing for Gregorius since the team acquiring him won't have to give up a draft pick. The shortstop hit .238 with a .717 OPS in his first year back from Tommy John surgery.

Didi Gregorius went 1-for-4 with a three-RBI double in Saturday's 9-4 loss to the Rangers.

Gregorius has had an injury-plagued season and is hitting .240 with 47 runs scored, 16 homers, 61 RBI and two stolen bases in 341 plate appearances this year. The veteran shortstop should be completely healthy going into next season and will be worth owning in deeper fantasy leagues.

Didi Gregorius went 1-for-5 with a two-run double as the Yankees defeated the Angels 8-0.

Gregorius came to the plate in the 4th inning with the bases loaded and the Yankees already up 3-0. His double down the right field line increased that lead to 5-0. The shortstop has now hit safely in five of his last six games.