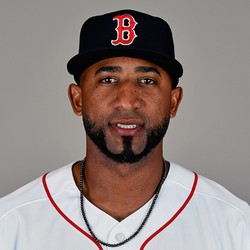 Nunez has struggled immensely this season so it was time for Boston to move on. He’ll always be remembered fondly by fans for his contributions to the 2018 World Series title. We expect him to pass through waivers unclaimed and then hit free agency.

Eduardo Nunez went 2-for-4 with a double, an RBI and a run scored Sunday against the Astros.

Nunez has not had much fantasy value this year as he has been playing in a reserve role. And the veteran infielder is hitting just .205 with a .220 on-base percentage and four extra-base hits.

John Aubin35 weeks ago
Eduardo Nunez could be activated on Monday

Eduardo Nunez (back) could be activated as soon as Monday according to Chris Cotillo of Masslive.com.

Nunez has been on the injured list since April 19 with a mid-back strain and has played in three rehab games in the minors. The veteran infielder will more than likely fill a utility role when he returns and will not be worth picking up in fantasy leagues.

Eduardo Nunez has been placed on the 10-day IL with a mid-back strain. Tzu-Wei Lin and Michael Chavis have been called up to the Red Sox in his stead.

Nunez injury could explain the lack of hitting so far this season. Hopefully, he can get his back strain fixed and come back to put up some better numbers.

Kari Thomas40 weeks ago
Eduardo Nunez is battling a back issue

Eduardo Nunez had to sit out Monday's game against the Orioles due to an upper-back issue, Chad Jennings of The Athletic reports.

Nunez was originally supposed to play on Monday but couldn't due to his back. The Red Sox have not said how severe the injury is and fantasy owners should be keeping an eye on updates with the veteran infielder.