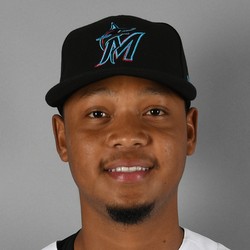 Marlins starter Elieser Hernandez allowed one earned run on three hits and one walk while striking out nine over five innings in a no-decision against the Giants on Sunday.

Hernandez has been up-and-down this season but has been pitching better of late. He will take a 5.03 ERA into his next start against the Nationals at home.

Marlins starter Elieser Hernandez allowed three earned runs on four hits and no walks while striking out five over five innings in a no-decision against the Brewers on Tuesday.

Hernandez is striking out nearly a batter per inning this season, but inconsistency has led to an ERA of 5.24. He is scheduled to take on the Giants in San Francisco in his next start.

Marlins pitcher Elieser Hernandez allowed five runs (three earned) on seven hits and two walks while striking out three over three innings in a no-decision against the Pirates on Thursday.

Hernandez has had an up-and-down year for the Marlins, flashing talent at times but struggling to find any kind of consistent success. He will take a 5.23 ERA into his next start against the Brewers at home, meaning he is not a starter that fantasy owners will want to stream in most formats.

Marlins starter Elieser Hernandez allowed four earned runs on six hits and two walks while striking out three over six innings in a no-decision against the Nationals on Friday.

Hernandez has had mixed results but has now pitched at least six innings in four of his last five starts. He will take a 5.06 ERA into his next start against the Pirates in Pittsburgh.

Marlins starter Elieser Hernandez allowed two earned runs on three hits and no walks while striking out five over six innings in Sunday's win over the Phillies. The win brings him to 3-5 on the season.

Hernandez has had an up-and-down season in Miami but has managed to strike out 65 batters over 63 1/3 innings while bouncing between the starting rotation and the bullpen. He is scheduled to take on the Nationals on the road in his next start.