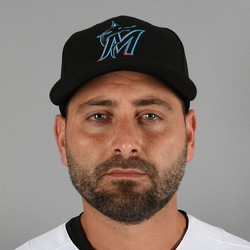 Francisco Cervelli and the Marlins have finalized their one-year, $2 million agreement that was reached Dec. 23.

The deal is now official, and Cervelli will head to Miami to back up Jorge Alfaro. While Cervelli has been fantasy-relevant in the past, he doesn't figure to have much of an impact outside of an injury to Alfaro.

Francisco Cervelli went 0-for-1 with two walks, a steal, and a run scored in the Pirates' 5-4 win over the Rangers on Tuesday.

Cervelli has been atrocious at the plate this season, with a .174 AVG and .509 OPS thus far. Don't expect many steals from him going forward, and he's not doing much else, so he isn't a very valuable asset these days.

Francisco Cervelli went 2-for-4 with a pair of singles in the Pirates' 6-2 loss to the Dodgers on Friday.

This was just Cervelli's second multi-hit game of the year, and his first since April 10. He now has an atrocious .184/.253/.250 triple slash on the year. He also has a career-worst 26.5% strikeout rate. Cervelli has a solid track record as a serviceable catcher, but his upside isn't high enough to wait out these struggles.

Francisco Cervelli went 1-for-4 with a two-run double and a run scored in the Pirates' 4-1 win over the Giants on Friday.

Boy, Cervelli really needed this one. He'll raise his average to meager .167 after this game, and has just an .067 ISO in 65 PA. Cervelli has proven serviceable in the past, but doesn't have high enough upside to make him worth rostering during such a rough patch. He'll be a fringy catcher in standard leagues all season.

Francisco Cervelli went 0-for-4 with a strikeout on Sunday versus the Nationals.

Cervelli was a popular option for two-catcher league but is hitting just .196 this season. The 33-year-old needs to turn it around soon or will be in danger of losing playing time with the rebuilding Pirates.