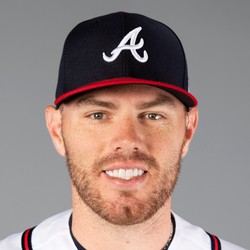 Freddie Freeman was scratched from Tuesday's lineup and should return Friday, according to manager Brian Snitker.

The reason is to attend to a family matter, according to the team.

Freddie Freeman was scratched from Tuesday's spring game against the Orioles for what the team said is a family matter.

There is no other news related to this so hopefully all is well and he won't continue to miss time.

Freddie Freeman (elbow) will return to the Braves lineup against the Phillies Monday.

Freeman was sidelined when inflammation cropped up in his surgically-repaired right elbow recently. Freeman has said that his pregame warmups might be altered a bit going forward but that he is not concerned at all with the flareup.

Freddie Freeman (elbow) won't return to game action until next week, though general manager Alex Anthopolous reiterated that the Braves are not concerned about the injury.

Freeman was scratched Tuesday due to right elbow inflammation. Despite the team's optimism, it's hard not to be at least a little worried about Freeman. He underwent arthroscopic elbow surgery in October, and dealt with consistent issues throughout 2019.

Freddie Freeman will be scratched from Tuesday's spring training matchup against the Twins due to elbow inflammation.

Manager Brian Snitker played off the lineup scratch as nothing serious and just a part of his rehab process, saying that it should just be a few days and "when he starts feeling good we'll get him back out there." It's been four and a half months since Freeman had his elbow surgery and while a lot of fantasy owners and Braves fans could get alarmed by this news, this doesn't seem to be anything to monitor too closely. As long as he can suit up for a few spring games before Opening Day Freeman should assume an early-round pick in all formats.