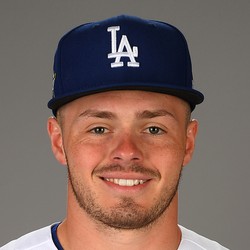 Gavin Lux has not yet cemented a starting role in the Dodgers' infield, according to manager Dave Roberts.

Lux remains the favorite to start at second base, but Roberts 'stopped short' of handing the title over to Lux this early in Spring Training. This is likely just a diplomatic statement by Roberts, but it leaves open the possibility of another Dodger potentially nabbing the starting job from Lux.

The belief is that the Dodgers won't trade top young player Gavin Lux in any deal this offseason.

The Dodgers are certainly lined up to be contenders again in 2020, but they apparently aren't willing to trade the young infielder Lux. After starting the 2019 season in Double-A, Lux made the majors to end the season and held his own. He owns five-tool upside and figures to be a popular player entering 2020 fantasy baseball drafts.

Gavin Lux went 2-for-3 with a homer, three RBI, and two runs scored in the Dodgers' 9-2 win over the Mets on Friday night.

Lux's homer was a three-run shot off Noah Syndergaard, an impressive feat. The 21-year-old rookie now has two homers and a steal over his past three starts.

Gavin Lux went 1-for-4 with an RBI and a stolen base as the Dodgers beat the Orioles 4-2 on Thursday.

This was Lux's first steal of his career and it came just two days after hitting his first big league homer. The 21-year-old got off to a slow start to his big league career but is now 4-for-9 over the past few days.

Lux also doubled in this one, finishing the game 3-for-4. The 21-year-old rookie had been off to a slow start to begin his big league career, so this performance was nice to see. Lux should continue serving as the Dodgers' everyday second baseman the rest of the way.