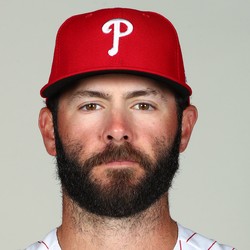 The Phillies placed starter Jake Arrieta on the injured list on Wednesday, and he will undergo tests on Thursday to determine whether or not he will have season-ending surgery on his ailing elbow, according to reports.

Arrieta has been pitching through bone spurs in his elbow for this last several starts, and the issue has apparently gotten progressively worse. While the tests will provide more information and the official word, Arrieta is expecting to have surgery and be shut down for the rest of the season.

Phillies starter Jake Arrieta allowed five earned runs on seven hits and one walk while striking out five over three innings in a no-decision against the Giants on Sunday.

Arrieta has been pitching through bone spurs in his elbow for some time now and increasingly looks to be uncomfortable on the mound. He only threw 66 pitches on Sunday, and he seemed frustrated with the elbow after the game, questioning whether or not he would be able to continue pitching through the injury. Look for an update on his status this week, but it is probably time to look elsewhere for pitching depth in all formats.

Phillies starter Jake Arrieta allowed two earned runs on five hits and two walks while striking out five over five innings in a no-decision against the Diamondbacks on Tuesday.

Arrieta continues to pitch through a bone spur in his elbow and continues to have short outings, as he has not completed six innings of work since the end of June. His next start is scheduled to come against the Giants in San Francisco.

Phillies starter Jake Arrieta allowed one earned run on four hits and one walk while striking out five over four innings against the Giants but had to leave the game after just 71 pitches due to elbow soreness. He did not factor into the decision.

Arrieta has been pitching through a bone spur in his elbow for a few weeks now and said after the game that it was bothering him during Thursday's start. He is apparently going to continue to pitch through his elbow pain, but don't be surprised if he continues to leave games early. He hasn't completed six innings of work since the end of June. His next start is scheduled to come against the Diamondbacks in Arizona.

Arrieta has not thrown a quality start since June 19 but had allowed just two earned runs over his last 10 2/3 innings coming into Friday. He now has a 4.51 ERA and 95 strikeouts over 123 2/3 innings and has been pitching with bone spurs in his elbow for at least his last few starts. He is scheduled to take on the red-hot San Francisco Giants at home in his next start.