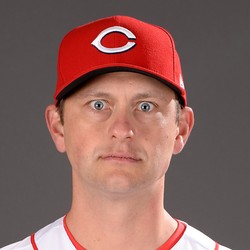 Jared Hughes allowed one hit and a walk while striking out two en route to securing a save on Wednesday.

Hughes has a stellar 1.37 ERA and figures to be the obvious choice as the Reds closer if Iglesias were to be traded.

Jonathan Ebanks2 years ago
Jared Hughes picks up save on Thursday

Reds reliever Jared Hughes got the final two outs in Thursday's 5-4 win over the Pirates, securing his second save of 2018.

It appeared as if Amir Garrett was the first choice to earn the save, but he gave up a two-run homer to Austin Meadows in the ninth. Hughes then came in to finish it off. The Reds are expected to use a committee at closer with Raisel Iglesias sidelined, but for now Hughes appears to have a leg up. It's not a high ceiling situation, but fantasy players in need of saves could do worse.

Jared Hughes earned his first save of the season in a ninth inning, two out mop-up role against the Mets on Friday. He entered after Jacob Barnes coughed up two runs in the top of the inning, and was able to shut the door on a 7-4 lead by retiring the final two batters.

Corey Knebel had thrown 41 pitches the day before, and the Brewers had a 7-2 lead heading into the ninth inning so asking Hughes to get the final two outs made plenty of sense. Knebel is first in line for saves in the Brewers bullpen with Neftali Feliz being removed from the closer's role. Hughes has a 2.63 ERA and a 1.61 WHIP with a 5/7 K/BB rate over 13.2 innings this season. There's no need to rush to get Hughes on your team as his save chances will come from scenarios like the one on Friday.

Hughes is not a household name, but he has been a valuable member of the Pirates pen all season. He's posting a career best 2.31 ERA despite allowing 55 hits in 53 innings pitched in 2015.