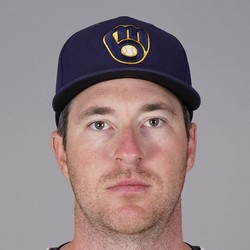 Yahoo 3B
ESPN 3B
CBS 3B
Jedd Gyorko traded to Dodgers

The Dodgers have acquired Jedd Gyorko from the Cardinals.

Gyorko will fill a bench role for the Dodgers, another bat who can pinch hit against lefties. With injuries to Chris Taylor, Enrique Hernandez, and David Freese, the Dodgers were desperate for more offensive depth. He's no more worth fantasy consideration in Los Angeles than he was in St. Louis.

Jedd Gyorko went 1-for-3 with a two-run home run in the Cardinals' 5-3 win over the Phillies on Thursday.

Gyorko took advantage of a rare opportunity to start, but still owns a paltry .200/.259/.320 batting line on the year. He doesn't play enough to have fantasy value, and he hasn't been performing when he plays anyway.

The Cardinals have activated INF Jedd Gyorko from the 10-day injured list.

Gyorko was nagged by a right calf strain most of spring training. INF/OF Drew Robinson was optioned to Memphis (AAA) in a corresponding move. Gyorko has hit 61 home runs for the Cardinals since 2016, second only to Matt Carpenter (81) in that span. He's a terrific spot-start against left-handed pitchers in deeper leagues.

Jedd Gyorko said he'll be good to go for the Cardinals' home opener on Thursday against the Padres.

Jedd Gyorko (calf) will open the 2019 season on the injured list.

Gyorko dealt with the calf problem most of the spring. He's still expected to be ready by the end of April, however. Gyorko isn't really a fantasy option right now.

Brendan Tuma - Too Much Tuma48 weeks ago