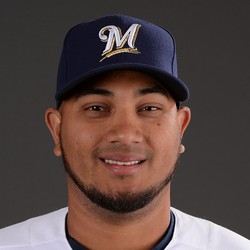 Jhoulys Chacin allowed four runs on five hits in just 2 2/3 innings to take the loss Saturday against Baltimore. He walked one batter while striking out three.

Chacin did not look good on Saturday giving up three home runs. The veteran pitcher finishes the season with a 3-12 record between the Brewers and the Red Sox with a 6.01 ERA. Chacin will have a hard time finding a starting pitcher job in the offseason.

Jhoulys Chacin gave up four runs on four hits and one walk while striking out five through 3 2/3 innings in a no-decision against the Rays on Monday.

Chacin struggled against the Rays and gave up two home runs. The veteran starter has a 3-11 record with a 5.81 ERA and 98 strikeouts through 23 starts this season. Chacin is scheduled to make his next start in the first game of a doubleheader Saturday against the Orioles.

Jhoulys Chacin is scheduled to serve as the Red Sox's opening pitcher Wednesday against the Giants.

Chacin has looked good since joining the Red Sox this month. The veteran pitcher has made three appearances (two starts), pitching 5 2/3 scoreless innings. Look for Chacin to go 2-3 innings on Wednesday.

Jhoulys Chacin started against the Blue Jays and did not allow a run while giving up two hits and two walks while striking out three over 2 2/3 innings on Thursday.

Chachin has been impressive in his three outings since joining the Red Sox. The veteran starter has struggled all season with the Brewers who ended up releasing him after registering a 5.79 ERA in 19 starts.

Jhuolys Chacin struck out four over two perfect innings to open Friday's 6-1 win over the Yankees.

Chacin signed a minor-league contract with the Red Sox a week ago, made his debut as an opener on Friday. The veteran starter had a 5.79 ERA, 1.56 WHIP and 80:39 K:BB in 88.2 innings for the Brewers before they let him go so fantasy owners should hold off before picking up Chacin to see if he has turned things around.