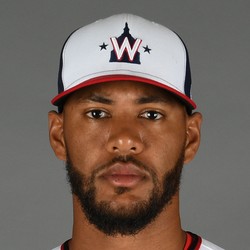 Nationals pitcher Joe Ross allowed two earned runs on three hits and three walks while striking out one over 2 1/3 innings against the Marlins on Saturday.

Ross is having a strong Spring but is in a tight battle with Austin Voth and Erick Fedde for the fifth spot in the Washington rotation. Ross and Voth appear to have the inside track for that fifth spot, but the Nationals will likely take the entirety of Spring Training to make their decision.

Nationals starter Joe Ross allowed no earned runs on one hit, and one walk while striking out two over three innings in Monday's matchup against the Miami Marlins.

Ross bounced between the bullpen, the starting rotation, and the minor leagues last season, and he did not have much sustained success. He has a chance to claim a spot in the Washington starting rotation this Spring.

Ross had a strong August for the Nationals, allowing just three earned runs and pitching to a 1.05 ERA over 25 2/3 innings. He did not far well in his first start in September, however, and will now take a 6.17 ERA into his next start against the Braves in Atlanta.

Nationals starter Joe Ross allowed two earned runs on six hits and four walks while striking out three over 4 1/3 innings in a no-decision against the Cubs on Saturday.

Ross had been on a nice run for the Nationals but left last week's start early after being hit in the leg by a comebacker and ran into trouble in the fifth inning on Saturday. He will look to bounce back when he takes on the Marlins at home in his next start.

Joe Ross left Monday's game against the Pirates after taking a comebacker off his right leg. He allowed three hits while striking out two through three 1/3 scoreless innings before exiting.

Ross didn't appear to be limping after the play, though with an 11-0 lead, the Nationals may have elected to exercise caution with him. He is considered day-to-day.