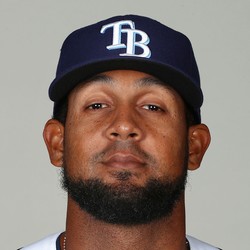 The Rays and Cardinals completed a deal on Thursday that sends 1B/OF/DH José Martínez, outfielder Randy Arozarena and a Competitive Balance Round A Draft pick to Tampa Bay for left-handed pitching prospect Matthew Liberatore.

Martínez will make most of his appearances as the team’s designated hitter, which is a more natural fit than playing the outfield or first base. He’ll split time with Ji-Man Choi, Austin Meadows and Yandy Díaz, who all saw time at DH in 2019. Over his career, Martínez has a .976 OPS against left-handers, including a .997 clip in 2019 despite seeing a dip in overall performance. In a division that is loaded with left-handed pitching, adding a bat like Martínez was a priority for the Rays this offseason.

Jose Martinez went 3-for-5 with two RBI and two runs scored in Wednesday's loss to the Diamondbacks.

Martinez was a menace batting second for the Cardinals Wednesday. On the season, he's batting .271 with 10 homers and 42 RBI.

Jose Martinez (shoulder) has opted not to receive a cortisone shot and hopes to resume baseball activities this weekend according to ESPN.com.

If Martinez can return to baseball activities this weekend that could put him on the timetable to return off the IL when he is first eligible. Fantasy owners should keep an eye on updates regarding Martinez's status.

The Cardinals placed Jose Martinez on the 10-day IL with an AC sprain in his right shoulder.

Martinez left Sunday’s game after running down a fly ball and crashing into the wall. He’ll likely miss 3-4 weeks with the injury and can be dropped in standard fantasy leagues. Randy Arozarena has been promoted from Triple-A in a corresponding move.

Martinez is being evaluated by the team’s medical staff. He was hitting .203 in 24 games since the All-Star break, maybe his shoulder has been bothering him before this game. Dexter Fowler replaced him in the lineup.