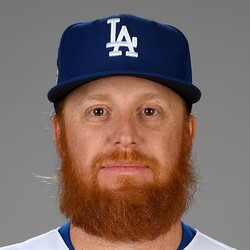 Justin Turner (hand) is expected to return to game action Friday against Seattle.

Turner was hit in the hand by a pitch in Wednesday's game, and subsequently had X-rays taken, which came back negative. After receiving Thursday off, he's slated to return to the lineup Friday.

The x-ray on Justin Turner's hand came back negative. Turner sounded quite optimistic after the game so this comes as no surprise.

Somehow Justin Turner is being selected in the NFBC on average as the 22nd third baseman off the board. Fantasy owners should be chomping at the bit to draft Turner at this current cost.

Justin Turner was hit by a pitch on his hand tonight. Turner stayed in the game, homering in his next at-bat. After the game he mentioned that his hand is okay but he will have an x-ray.

It doesn't sound like this HBP is going to cost Turner time, however, fantasy owners have to be concerned about this reoccurring due to Turner's close approach at the plate. He has also missed time in the past due to being hit on the hand/wrist. The talent and bat are fantastic with the only question mark being volume. JT is projected to hit third in what should be one of the best offenses in all of baseball. His NFBC ADP is 164 over the previous week, providing some room for profit if he can stay on the field.

The Dodgers are confident Turner will be "able to perform at his level". The 34-year-old struggled in September but was playing injured for most of it.

Justin Turner (back) is absent from Saturday’s lineup versus the Giants.

Turner has played just four games since September 7th due to ankle and back issues. The Dodgers are resting him with the hopes he’ll be a full-go come playoffs. Matt Beaty is playing third base in his place today.