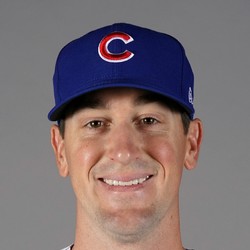 Kyle Hendricks allowed one run on two hits and one walk while striking out four across four innings in Saturday’s Cactus League Game against Cleveland.

Hendricks has been lights out this spring, owning a 1.00 ERA, 0.44 WHIP and a 8:1 K:BB across nine innings. The 30-year old could start Opening Day for the Cubs, but he will need to beat out both Jon Lester and Yu Darvish for that honor. Hendricks will be in the Cubs rotation regardless and is one of the most consistent starters in baseball.

Hendricks has looked sharp this spring, allowing only one hit while striking out four across five innings. He figures to be a key part of the Cubs rotation, owning a 11-10 record, 3.46 ERA, 1.13 WHIP and 150:32 K:BB across 177 innings last season. Hendricks is currently 40th in the starting pitcher consensus rankings, and fantasy owners should expect similar numbers from one of the most consistent starters in baseball.

Kyle Hendricks (11-10) allowed six runs (five earned) over six innings, taking the loss against the Pirates on Tuesday. He struck out five.

Hendricks was cruising through six, but ran into trouble in the seventh, allowing five straight hits to start the inning. Hendricks lines up to make one more regular season start Sunday against the Cardinals.

Kyle Hendricks did not factor into the decision Thursday against the Cardinals, allowing four runs on eight hits over 5.1 innings. He struck out six and walked one.

Hendricks has allowed just one run in each of his last three starts, but he couldn't keep that streak going on Thursday. He still owns a solid 3.37 ERA, 1.13 WHIP, and 145:32 K:BB across 171 innings this season. He'll take on the Pirates next on Wednesday, which should be his final start of the season.

Kyle Hendricks (11-9) earned the win Saturday against the Pirates, allowing one run on seven hits and no walks across six innings. He struck out two.

Hendricks pitched well, and his team provided plenty of run support. He now has a 1.54 ERA in September, just as the Cubs need the playoff push. Overall, he has a 3.26 ERA and 1.12 WHIP in 165.2 innings. He'll take on the Cardinals next on Thursday.

Connor Rooney43 weeks ago
Who Should I Draft?
Do Not Sell
Are you looking to contact Customer Support about a subscription or account related question?
Yes
No, I'm a California resident looking for the California Consumer Privacy Act form