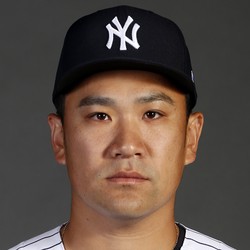 Masahiro Tanaka went three innings and gave up two runs on five hits and one walk along with two strikeouts as he got hit with the loss Sunday against the Rangers.

Tanaka came in for the second inning on Sunday as Chad Green started and pitched the first frame. The Yankees wanted the veteran starter to get some innings in before the playoffs. Tanaka finishes the season with an 11-9 record with a 4.45 ERA.

Masahiro Tanaka picked up the win against the Angels on Thursday, giving up one earned run on four hits over seven innings, striking out six and walking none as the Yankees won by a 9-1 score.

Tanaka has been inconsistent this season mixing good starts with bad. The veteran starter is now 11-8 on the year with a 4.47 ERA and 1.23 WHIP across 179 innings on the year. Tanaka will get one more start in the regular season, likely against the Rays on Wednesday.

Tanaka has been very inconsistent and frustrating to own this season. The veteran starter has a 10-8 with a 4.60 ERA, 1.26 WHIP, and 141 strikeouts in 172 innings this season. Tanaka will face the Blue Jays again in his next outing Friday at home.

Masahiro Tanaka did not factor into the decision against Boston on Sunday, pitching four innings and giving up four runs on eight hits while striking out two. He did not walk a batter.

Tanaka now has a 4.53 ERA, 1.25 WHIP and 135:39 K:BB through 167 innings on the season. The veteran starter will face the struggling Blue Jays on the road in his next start and is worth playing in most fantasy formats.

Masahiro Tanaka took the loss Monday as the Yankees were blanked 7-0 by the Rangers, giving up two runs on seven hits and two walks over six innings while striking out five.

Tanaka's record drops to 10-7 with the loss and his ERA stands at 4.42 with a 1.23 WHIP. The veteran starter will face the Red Sox in Boston on Sunday in his next outing.