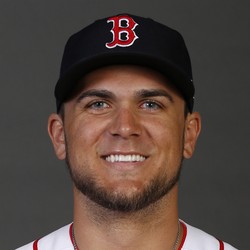 Yahoo 1B,2B
ESPN 1B,2B
CBS 1B,2B
Michael Chavis to see time at both first and second base this year

The Red Sox plan to play Michael Chavis at both first base and second base in order to keep his bat in the lineup this year.

The plan is seemingly to play Chavis at second base versus right-handers (with Mitch Moreland playing first). Versus lefties, Chavis will play first base with Jose Peraza filling in at second. It's reassuring to hear that the 24-year-old will basically be an everyday player this season. Chavis hit 18 homers in 95 games as a rookie last year, though he was extremely streaky at times.

Michael Chavis (oblique) is not responding well to baseball activity and could be shut down for the season, Alex Speier of The Boston Globe reports.

There was hope that Chavis could get into some games before the season-ending but that looks doubtful it looks like the rookie's season is done. Chavis finishes the season hitting .254 with 18 home runs and 58 RBI.

Michael Chavis (shoulder/oblique) suffered a setback and is unlikely to return this season.

Chavis has been sidelined since mid-August with a sprained shoulder, he was originally scheduled to return this weekend before suffering a right oblique injury. It has been reported that the Red Sox are not optimistic about Chavis returning this season. Brock Holt and Marco Hernandez will continue to fill in at second base for the Red Sox down the stretch.

Chavis has been on the IL with a shoulder injury and looks to be recovered from that but experienced a setback in the form of side discomfort while playing in a minor league rehab game. Fantasy owners should keep an eye on updates to see if the rookie can return the weekend or if he will need longer.

Michael Chavis (shoulder/side) is returning to Boston to be evaluated Monday, Alex Speier of The Boston Globe reports.

Chavis was scratched from a rehab game due to right side soreness, and he'll return to the big-league club to determine the severity of the injury. Fantasy owners should keep an eye on updates with Chavis.

John Aubin45 weeks ago
Who Should I Draft?
Do Not Sell
Are you looking to contact Customer Support about a subscription or account related question?
Yes
No, I'm a California resident looking for the California Consumer Privacy Act form