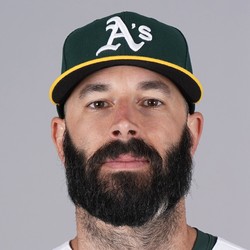 Mike Fiers allowed two runs on four hits and two walks while striking out four through five innings in Friday’s 4-3 loss to the Mariners. He did not factor into the decision.

Mike Fiers (15-4) allowed two hits and zero walks while striking out five through eight scoreless innings in Friday's 8-0 win over the Rangers. He picked up his 15th win of the season.

Fiers left his previous start with nerve irritation in his arm, but it didn't bother him in Friday's 8-0 win, tossing eight scoreless innings. Before this start, he had allowed 16 runs over his previous 7 2/3 innings. Fiers has a 3.91 ERA and 1.19 WHIP with 122 strikeouts in 179 2/3 innings this season. His next scheduled start is Thursday, away against the Mariners.

Mike Fiers left Saturday's game against the Rangers with right arm nerve irritation. He allowed three runs on three hits and a walk while striking out one in one 1/3 innings before exiting.

Fiers left his start Saturday against the Rangers in the second inning with arm nerve irritation and his status for his next outing is up in the air. The Athletics have been using a six-man rotation, so the team could just skip his start and drop to a standard five-man rotation. Fiers is considered day-to-day.

Mike Fiers (14-4) allowed nine runs on nine hits and no walks while striking out one through an inning in Monday's 15-0 loss to the Astros. He was charged with his fourth loss of the season.

Fiers gave up three home runs in the first inning and allowed two more long balls before being pulled without recording an out in the second frame. He owns a 3.97 ERA and 1.22 WHIP with 116 strikeouts in 170 innings this season. His next scheduled start is Sunday, away against the Rangers.

Mike Fiers allowed four runs on seven hits while striking out four and two walks through five innings in Tuesday's 7-5 win over the Angels. He did not factor into the decision.

Fiers pitched reasonably well, but most of the damage was caused from a pair of solo home runs by Mike Trout and Albert Pujols. He's sporting a 3.48 ERA, 1.17 WHIP and 112:47 K:BB over 163 innings. His next scheduled start is Monday, away against the Astros.