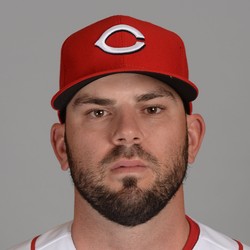 Free agent third baseman Mike Moustakas has agreed to a four-year deal with the Cincinnati Reds, according to a report from MLB insider Jeff Passan. He is expected to play second base for the Reds.

Moustakas agreed to a one-year deal with the Milwaukee Brewers after a qualifying offer hurt his value in free agency, but he was expected to be a popular name in free agency this time around after batting .254 with 35 home runs, 80 runs scored, 87 RBI, and three stolen bases across 143 games in 2019.

Mike Moustakas went 1-for-3 with a solo home run in Tuesday's win over the Padres.

Moustakas broke the 1-1 tie in the seventh inning with a solo blast. The Brewers will hope that he can keep up his impressive statistical season, and carry them into the playoffs and beyond. He's batting .262 with 35 home runs and 85 RBI.

Mike Moustakas went 2-for-3 with a walk and a two-run home run in Saturday's win over the Cardinals.

Moustakas tied the game with a two-run homer off Jack Flaherty in the fourth inning. He's now 6-for-13 with three homers in four games since returning from a minor wrist injury.

Brewers third baseman Mike Moustakas went 3-for-4 with two home runs, five RBI, and a walk in Wednesday's win over the Marlins. The homers were his 32nd and 33rd of the season.

Moustakas returned from a wrist injury to start on Wednesday, and his two home runs indicate that he is healthy. He will be of even bigger importance to the Brewers now that Christian Yelich is out for the rest of the season.

Mike Moustakas (hand) remains out of the lineup Saturday again the the Cubs.

Moustakas returned to the lineup after missing five games, but his hand did not respond well. Manager Craig Counsell provided an updated Friday, stating Moustakas is “not making progress” and that he remains in significant pain. Travis Shaw and Hernan Perez have been splitting time at third base in Moustakas absence.