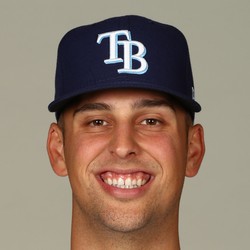 Nate Lowe went 2-for-3 with a double, a walk, and two runs scored Friday against the Blue Jays.

Lowe has been solid in his opportunities in the majors this season as he has had a few trips up from the minors. Overall the rookie is hitting .272 with seven home runs, 18 RBI and 24 runs scored over 48 games.

Nate Lowe went 1-for-5 with a game-winning two-run home run in extra innings as the Rays beat the Red Sox by a 5-4 score.

Lowe played the role of hero for the Rays on Saturday night, blasting a walk-off two-run homer off of Josh Smith in the 11th inning. Lowe is hitting .264 with seven home runs and 19 RBI over 45 games this season.

Nate Lowe went 2-for-3 with a two-run homer, a walk and scored two runs to lead the Rays’ to an 8-2 blowout victory over the Indians on Sunday.

Lowe was called up from Triple-A Durham on Sunday and made an immediate impact for the Rays. The rookie may struggle to see at-bats as he along with Ji-Man Choi and Jesus Aguilar will form a platoon at first base. Lowe may also see some time at DH.

Rays first baseman Nate Lowe was optioned back to Triple-A on Thursday, a day after the team acquired first baseman Jesus Aguilar from the Brewers. Lowe is a left-handed bat while Aguilar bats righty.

Lowe has had success with the Rays this season, so the decision to option him is surprising. In 30 games this year, he is batting .294 with five home runs, 17 runs scored, and 13 RBIs across 102 at-bats. He will likely be recalled at some point this season, but with Tampa's crowded infield it is hard to see him finding regular at-bats without an injury.

Nate Lowe went 3-for-5 and scored a run while also driving in a run as the Rays beat the Blue Jays by a 10-9 score.

Lowe's average is up to .301 after Sunday. The rookie first baseman also has five home runs and 13 RBI over 28 games. Unfortunately, Lowe is sitting against lefties which hurts his fantasy value and right now is only worth owning in deeper leagues.