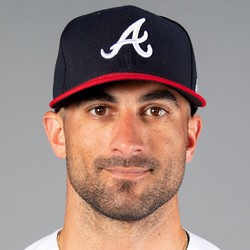 Nick Markakis and the Braves have come to terms on a one-year contract worth $4 million.

Markakis had an option that was declined by Atlanta but they are still bringing him back. The 35-year-old played in 116 games last year, batting .285 with nine homers and two steals.

Nick Markakis was placed on the 10-day injured list Saturday with a fractured left wrist. He won't require surgery and could return at some point in September.

Markakis was placed on the 10-day injured list Saturday after getting hit by a pitch on the wrist in Friday's game. He can safely be dropped in many league formats as the earliest he will return is the end of September. Austin Riley and Ender Inciarte figure to see a slight bump in playing time. Markakis slashed .286/.359/.440 with nine home runs, 55 RBI, and 57 runs scored in 104 games this season.

Braves outfielder Nick Markakis went 0-for-5 with a strikeout in Tuesday's loss to the Royals.

Markakis had hit in four straight games coming into Tuesday, with six total hits during that span. On the season, he is batting .286 with 56 runs scored, nine home runs, 55 RBIs, and two stolen bases.

Braves outfielder Nick Markakis went 2-for-4 with a home run in Thursday's loss to the Nationals. The homer was his ninth of the season.

Braves outfielder Nick Markakis went 3-for-4 with three doubles, an RBI, and a run scored in Thursday's win over the Phillies.