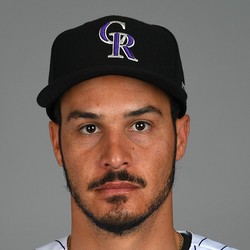 Yahoo 3B
ESPN 3B
CBS 3B
Nolan Arenado homers against Cubs

Nolan Arenado hit his second homer of the spring on Tuesday against the Cubs.

Arenado is set up for another monster fantasy season playing half his games in Coors Field. The all-world third baseman was once again fantastic in 2019, batting .315 with 41 homers, 118 RBI, and 102 runs scored.

Thomas Harding of MLB.com writes that Nolan Arenado is feeling disrespected by the Rockies' front office.

"There's a lot of disrespect from people there that I don't want to be a part of. You can quote that" were some of Arenado's words that he exchanged via text message. Arenado has been mentioned in trade rumors this off-season, which has apparently upset the star third baseman. He has an opt out in his contract following the 2021 season, which makes a trade difficult. However, perhaps Arenado would be willing to get rid of that if he's that unhappy with his situation in Colorado.

The Rockies and Cardinals are reportedly exchanging names that could be involved in a trade centering on Nolan Arenado.

While the Cardinals should have a solid offense in 2020, the move from Coors Field would severely impact Arenado's value this season and in future years. There has been debate for some time around just how good the third baseman would be outside of Coors full time. Hopefully fantasy owners won't have to find out.

Jon Morosi of MLB Network reports Nolan Arenado has a "50/50" chance of being traded this off-season.

He adds that a half-dozen teams have checked in with the Rockies and that Colorado doesn't want to trade him within the division, which rules out the Dodgers. So far Arenado has been linked to the Braves, Rangers, Nationals, and Cardinals. He has a full no-trade clause, however, which gives him veto power over any potential deal.

Nolan Arenado is absent from Colorado's lineup on Saturday with a sore side.

Rockies manager Bud Black says Arenado is dealing with "side soreness". It sounds as if he might not play on Sunday either. The all-world third baseman has hit .315 this year to go along with 41 homers and 118 RBI.

Brendan Tuma - Too Much Tuma26 weeks ago