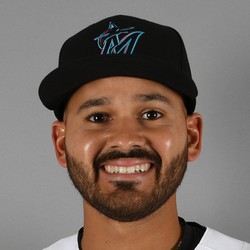 Marlins starter Pablo Lopez allowed five earned runs on five hits and four walks while striking out two over five innings in a no-decision against the Brewers on Wednesday.

Lopez still hasn't won a start since returning from the injured list, logging three losses and a no-decision while allowing 17 earned runs across the four starts. He will take a 4.97 ERA into his next start against the Diamondbacks in Arizona.

Marlins starter Pablo Lopez allowed six earned runs on six hits and no walks while striking out one over three innings in a loss to the Nationals on Saturday.

Lopez has now allowed 10 earned runs over eight innings since returning from the injured list, and he will take a 4.89 ERA into his next start against the Royals at home.

Marlins starter Pablo Lopez allowed four earned runs on five hits and one walk while striking out three over five innings in Monday's loss to the Reds.

Monday was the first start for Lopez since June 15, and a three-run home run was what ultimately saddled him with the loss. He will look to bounce back when he takes on the Nationals in his next start but should be avoided outside of deeper formats.

Pablo Lopez (shoulder) was reinstated from the 10-day injured list ahead of his scheduled start Monday against the Reds.

Lopez will start for the first time since the All-Star break, as a shoulder injury has kept him on the shelf for more than two months. He ended five-start rehab assignment, tossing six innings and allowing two runs (one earned) while striking out five in his Aug. 21 outing for Triple-A New Orleans. Lopez will most likely be on a pitch count tonight, wait until after this start to stream him in fantasy.

Pablo Lopez (shoulder) will return to Miami and throw a bullpen session Friday.

In three rehab starts, Lopez allowed 12 runs on 13 hits while walking four through five innings. Lopez was placed on the injured list June 19th, and it's unclear how many additional rehab starts Lopez will need before being activated from the 10-day injured list.