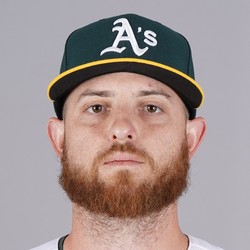 Blackburn made his season debut in the loss and it didn't look very good. He picked up a disappointing 7.16 ERA through six starts last season, he's not a trustworthy option.

Paul Blackburn allowed six runs (five earned) on seven hits and a walk over four innings in Friday's loss to the Indians. He struck out three.

Although Blackburn threw 6 1/3 shutout innings against the Indians in his last start, he had nowhere near the same level of success this time. Blackburn now has a 7.16 ERA and 1.41 WHIP, so to the extent you were lured in by his last start, you shouldn't have been.

Paul Blackburn held the Indians scoreless over 6 1/3 innings Friday. He allowed three hits and a walk to go with five strikeouts.

Blackburn moved to 2-2 with the impressive outing. It was his longest outing of the season, and it was his first quality start since his debut against the Royals earlier this month. He now has an ERA and WHIP of 6.46 and 1.31 over five starts, but he's shown that he can be considered as a streamer in favorable matchups in deep leagues.

Paul Blackburn allowed eight runs on eight hits and two walks over only 1 1/3 innings Wednesday against the Astros.

It was night and day compared to his first start of the season, in which he registered a quality start and a win against the Royals. The competition certainly changed, but even so Blackburn is hard to trust at this point.

Paul Blackburn is still feeling tightness in his right forearm. The 24-year-old had been hoping to resume throwing by the end of this week, but that won't happen.

There had been hopes that Blackburn would be able to resume throwing but his injury is still lingering. Blackburn pitched well last season when called up and finished with a 3.22 ERA over 10 starts.