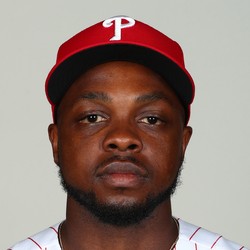 Phillies outfielder Roman Quinn went 1-for-2 with a home run, a stolen base, a walk, and two runs scored in Thursday's win over the Blue Jays. The homer and the steal were both firsts of the Spring for Quinn.

Quinn is battling for both a roster spot and early playing time with the Phillies with Andrew McCutchen expected to start the year on the injured list. However, Quinn has always had trouble staying healthy and is merely a speed-first outfielder likely destined to a bench role.

Phillies outfielder Roman Quinn went 1-for-4 with a solo home run and two runs scored in Friday's win over the Padres, but he also left the game due to groin tightness.

Quinn has been riding a little hot streak lately, with hits in four straight games and multiple hits in two of those games.

Roman Quinn went 2-for-4 in Wednesday's win over the Tigers.

This was Quinn's first game of the season in which he delivered multiple hits. Until performances like these become the norm, he is not suitable to own.

Roman Quinn went 1-for-5 with a home run on Tuesday against the Tigers.

Quinn's two-run blast in the second put Philadelphia up a run. That lead would disappear as the game would eventually finish in the 15th. Consistent at-bats have been tough to receive as of late for Quinn, as he has recorded just 17 plate appearances in July. He's not worth considering in most fantasy leagues.

Quinn hurt his groin in the game against the Mets on Wednesday night. The speedy outfielder was just activated from the IL last week after dealing with a hamstring issue. Dylan Cozens will be called up to take Quinn's spot and is not fantasy relevant.

John Aubin1 year ago
Who Should I Draft?
Do Not Sell
Are you looking to contact Customer Support about a subscription or account related question?
Yes
No, I'm a California resident looking for the California Consumer Privacy Act form