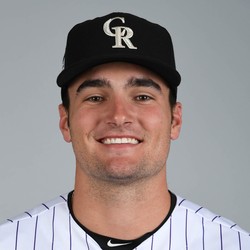 Sam Hilliard belted a pinch-hit homer off Josh Hader in the bottom of the ninth as the Rockies wound up beating the Brewers 3-2 on Saturday.

Hilliard's homer helped force extra innings before Trevor Story clubbed a walk-off shot in the bottom of the 10th. The 25-year-old Hilliard has now hit seven homers in 26 games wit the Rockies since being recalled from Triple-A. He would be an interesting fantasy option if given everyday at-bats next season.

Sam Hilliard went 2-for-4 with a two-run shot in a losing effort at home against the Bucs on Thursday.

Hilliard now has two big league homers in his first eight at-bats. Given that he hit .262/.335/.558 with 109 runs scored, 35 home runs, 101 RBI and 22 stolen bases at Triple A Albuquerque prior to his promotion, he is definitely worth a pick-up if you're looking for a possible offensive spark plug. He plays his next four games at Coors Field.