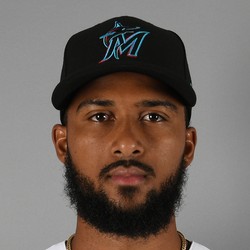 Marlins starter Sandy Alcantara allowed one earned run on six hits and no walks while striking out five over six innings in Sunday's win over the Phillies.

Alcantara allowed just two earned runs over his final 13 innings of the season to finish the year with a 3.88 ERA.

Marlins starter Sandy Alcantara allowed two earned runs on six hits and no walks while striking out six over seven innings in a no-decision against the Mets on Tuesday.

Alcantara is finishing the season strong and now has his ERA back under the 4.00 mark. He will try to keep things that way when he takes on the Phillies on Sunday, assuming he makes his final start.

Marlins starter Sandy Alcantara allowed four earned runs on seven hits and two walks while striking out three over 5 2/3 innings in Wednesday's loss to the Diamondbacks.

Alcantara has now lost back-to-back starts, although his previous loss was in an outing that saw him allow just one earned run over seven innings. He will now take a 4.00 ERA into his next start against the Mets in New York.

Marlins starter Sandy Alcantara allowed one earned run on nine hits and no walks while striking out six over seven innings in a loss to the Giants on Friday.

Alcantara has now allowed just one earned run over his last 16 innings in his last two starts to lower his ERA to 3.93 on the year. He has been consistently pitching deep into games over the last several weeks and will look to continue this run when he takes on the Diamondbacks in Arizona in his next start.

Alcantara has a 4.04 ERA on the year but has flashed at times this season. His issue has been consistency. He will take on the Giants in San Francisco in his next start.