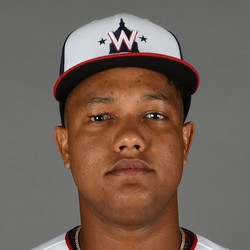 Washington has a crowded infield at the moment. Martinez added that Howie Kendrick will mostly play first base and second base. Meanwhile, Asdrubal Cabrera and Carter Kieboom will get most the reps at the hot corner. It'll be important to monitor these position battles throughout March.

Free-agent infielder has agreed to a two-year, $12 million deal with the Washington Nationals, according to a report from MLB insider Ken Rosenthal.

While he certainly went through lulls in 2019, Castro ended the year with solid numbers despite playing on a bad Marlins team, in a pitcher-friendly home ballpark, and without much protection in the lineup. He finished the year with a .270 average, 22 home runs, 68 runs scored, 86 RBI, and two stolen bases. He is still just 29 years old and could be an intriguing middle-to-late round target in deeper leagues now that he is expected to play second base for the Nationals.

Starlin Castro's $16 million club option was not picked up by the Marlins, making him a free agent.

Castro will hit free agency after hitting .270/.300/.436 with a career-high in both homers (22) and RBI (86) last season. He could provide better overall numbers if he lands with a more potent offense.

Marlins infielder Starlin Castro went 1-for-2 with a solo home run in Sunday's win over the Phillies. The homer was his 22nd of the season.

Castro had a forgettable first half of the year but finished the season strong, hitting seven home runs in September to set a new career-best with 22.

Marlins infielder Starlin Castro went 3-for-4 with a double, a solo home run, and two runs scored in Friday's loss to the Nationals. The homer was his 21st of the season.

After a disappointing first half, Castro has turned it on in the second half. He has been gradually rebuilding his value for 2020 redraft leagues and could be in intriguing late-round option, especially if he is traded this offseason.