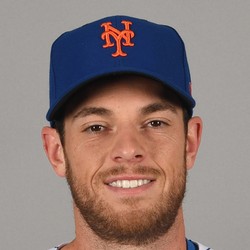 Mets starter Steven Matz tossed six shutout innings in Saturday's win over the Atlanta Braves, allowing two hits and five walks while striking out seven. The win brought him to 11-10.

Matz had allowed 13 runs over his previous two starts coming into Saturday, but he was able to close out the season strong in a win over the Braves. He finishes the year with a 4.21 ERA and 153 strikeouts over 160 1/3 innings.

Mets starter Steven Matz allowed six earned runs on nine hits and no walks while striking out three over five innings in Monday's loss to the Marlins.

Matz has now allowed 13 earned runs over his last nine innings to raise his ERA from 3.84 to 4.37 on the year. He should get one more start against the Braves on Saturday.

Mets starter Steven Matz allowed seven earned runs on six hits and two walks while striking out four over four innings in a loss to the Rockies on Monday. The loss drops him to 10-9 on the season.

Matz allowed two home runs on Monday, which accounted for four of the seven runs he allowed. He had been on a strong run of late for New York, but Monday's performance showed the low floor that he has shown to have this season. He will take a 4.16 ERA into his next start against the Reds in Cincinnati.

Mets starter Steven Matz tossed six shutout innings in Wednesday's win over the Diamondbacks, allowing four hits and three walks while striking out seven. The win brings him to 10-8 on the season.

Matz has been quietly on a strong run for several weeks now, and Wednesday's performance dropped his ERA down to 3.84 on the year. He is scheduled to take on the Rockies in Colorado in his next start.

Mets starter Steven Matz allowed two earned runs on six hits and three walks while striking out four over 5 2/3 innings in a no-decision against the Phillies on Friday.

Matz has quietly lowered his ERA by more than a half of a run over the last month, recording four straight quality starts before allowing four earned runs over 10 2/3 innings over his last two starts. He will take a 4.00 ERA into his next start against the Diamondbacks at home.