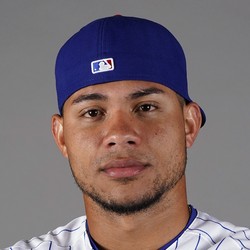 Wilson Contreras went 3-for-3 with a solo home run and two runs scored in Tuesday's 16-3 Cactus League win over the Giants.

Contreras is now slashing .292/.346/.583 with two home runs, four RBI and three runs scored across 26 plate appearances this spring. The 27-year-old is a top-5 fantasy catcher and is currently fourth in the expert consensus rankings.

Willson Contreras heard his name mentioned in trade rumors in the offseason but nothing materialized so he is back as the starting catcher for the Cubs. He is a weapon against the running game with his strong, accurate arm along with his ability to catch runners who are not paying attention by snapping a throw off behind them.

Contreras is a top-5 fantasy catcher and should be owned in all leagues. He also has a solid chance to bat in a favorable place in a strong batting order either as the 5th or 6th spot.

Jeff Passan of ESPN reports teams in search of catching help are getting the sense that Willson Contreras could become available this off-season.

The Cubs need to get creative this winter. There are plenty of catchers available in free agency, which could make Contreras more expendable in the eyes of the Cubs. The 27-year-old is under team control through 2022.

Willson Contreras went 1-for-4 with a solo home run in Wednesday's loss to the Reds.

Contreras's home run came in the seventh inning and knotted up the game at 2-2. He's batting .308 in 39 September games, and the Cubs will hope to see him keep this up as they push towards the playoffs.

Willson Contreras went 3-for-4 with a pair of home runs, three runs scored, and a walk Friday against the Pirates.

Connor Rooney43 weeks ago
Who Should I Draft?
Do Not Sell
Are you looking to contact Customer Support about a subscription or account related question?
Yes
No, I'm a California resident looking for the California Consumer Privacy Act form