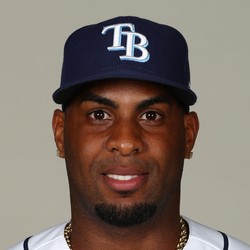 Yandy Diaz went 2-for-3 with two singles in the Rays' 3-1 loss to the Red Sox on Wednesday.

Diaz is hitting .345 this spring and is eligible at both first and third base on most fantasy sites. The 28-year-old could be a nice corner infield option to pick up late in drafts.

Yandy Diaz went hitless in three at bats as the Rays beat the Orioles 1-0 on Saturday.

Diaz is hitting .250 with a .519 OPS this spring. The 28-year-old should see regular action at third base for Tampa Bay this year. He also hit leadoff a lot against lefties in 2019, which should help his fantasy value.

Yandy Diaz (foot) will play in an instructional league game Saturday with the goal of being activated from the 60-day injured list Sunday, Juan Toribio of MLB.com reports.

This is good news for fantasy owners as Diaz has made a quicker-than-expected recovery from a fractured foot, as the expectation had been that he wouldn't return this season. Keep an eye on updates to see if Diaz does indeed make it back on Sunday.

Rays infielder Yandy Diaz had a CT scan that revealed what they said was an uncommon hairline fracture of the navicular bone in his left foot, according to Rays beat writer Marc Topkin on Twitter. He will be shut down for 6-to-8 weeks before being re-evaluated.

Diaz was on the injured list with a foot contusion, but he was not progressing and felt increased pain while fielding ground balls this week. Now that it was revealed that he will be shut down for the next two months with a hairline fracture, he will miss the rest of the fantasy season and playoffs and can be dropped in redraft formats.

Rays infielder Yandy Diaz has yet to resume baseball activities as he attempts to recover from a foot contusion after fouling a ball off his foot in a game last week. Manager Kevin Cash indicated that both Diaz and Brandon Lowe are still "aways away" from returning.

Neither Diaz nor Lowe broke any bones after fouling balls off themselves, but both have been slow to recover and remain without timelines for returns. Look for an update on their statuses later in the week.