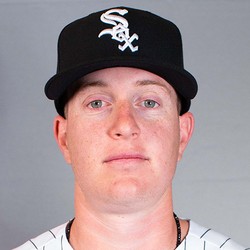 Chicago White Sox catcher Zack Collins went 1-for-2 with a two-run homer in a 6-5 win over the Royals on Sunday.

As a rookie, Collins hit three homers in 86 at-bats in 2019. In the offseason, the White Sox signed All-Star Yasmani Grandal to be their starting catcher, so Collins is ticketed for a reserve role in 2020.

Chicago White Sox catcher Zack Collins went 1-for-4 with a solo homer in a 3-1 win over the Twins on Wednesday.

Collins has homered in two consecutive games. The rookie backstop is hitting .138 with three homers, eight runs, and seven RBI through 65 at-bats.

Chicago White Sox catcher Zack Collins went 1-for-5 with a three-run homer in a 5-4 win over the Rangers on Friday.

Collins just made his MLB debut on Wednesday. The rookie prospect is an intriguing power bat with catcher eligibility who could emerge as a useful fantasy asset if he acclimates quickly to MLB pitching.

The Chicago White Sox are calling up former first-round pick catcher Zack Collins, according to a report from Andy Slater on Twitter.

In 199 plate appearances in Triple-A this season, Collins has a .258 average to go with nine home runs, 33 runs scored and 38 RBIs. His 17.6% walk rate this season makes him an intriguing candidate for OBP leagues, but it comes with a 31.7% strikeout rate.

Mike Maher - The Birds Blitz1 year ago
Who Should I Draft?
Do Not Sell
Are you looking to contact Customer Support about a subscription or account related question?
Yes
No, I'm a California resident looking for the California Consumer Privacy Act form