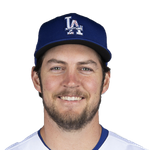 Bauer capped off a Cy Young season by signing a massive deal with the Dodgers. There's no other way to describe Bauer's 2020 season other than utterly dominant. A 1.73 ERA, a 0.79 WHIP, and a 36% strikeout rate. Notably, the spin rate on almost all of his pitched jumped dramatically, and every single one of them was more effective than we'd previously seen. Bauer had an outstanding season in 2018 and followed it up with a sub-par 2019, so we shouldn't take for granted that he'll be the best pitcher in baseball for the second season in a row. But on the best team in baseball with a near bulletproof 2020 resume, he should be drafted as a top-five starter and a second-round pick.