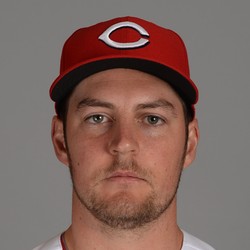 Bauer was less than sharp Sunday, as he allowed two homers and was touched up for four runs in the first inning. He now owns a 4.48 ERA on the season, and has 253 strikeouts in 213 innings. His last start of the season should come Saturday at Pittsburgh.

Trevor Bauer (2-4) earned the win Sunday against the Diamondbacks, allowing one run on four hits and one walk over eight innings. He struck out nine.

Bauer was dominant in earning his second win in a Reds' uniform, limiting the Diamondbacks to one run. Over his last two outings, Bauer has allowed three runs and struck out 17 in 14.1 innings. He'll take on the Mets next on Saturday.

Trevor Bauer did not factor into the decision Tuesday against the Mariners, allowing two runs on three hits and three walks over 6.1 innings. He struck out eight.

Bauer held the Mariners scoreless through four innings before coughing up solo homers in the fifth and sixth innings. It was the third straight start in which Bauer allowed two home runs. Since coming to the Reds, Bauer has posted a 7.40 ERA, 1.57 WHIP, and a .287 BAA in eight outings. He'll take on the Diamondbacks Sunday in his next start.

Trevor Bauer did not factor into the decision in Wednesday's win over the Phillies, allowing four runs on six hits and two walks over five innings. He struck out six.

Bauer seemed to be cruising after four innings with a five-run lead, but things unraveled for him in the fifth, allowing two home runs. The Reds' bullpen would ultimately blow the lead in the seventh. Bauer now owns a 8.23 ERA through seven starts with the Reds.

Trevor Bauer (10-12) took the loss in game one of Saturday's double header against the Cardinals, allowing six runs on seven hits and three walks over four innings. He struck out five.

Make it back-to-back stinkers for Bauer, who has been unpredictable since being acquired by the Reds. He coughed up two homers, and was catching too much of the plate, surrendering seven hits (four extra-base hits) in four innings. The outing raises Bauer's season ERA to 4.53, and his WHIP to 1.29. Though he's shown flashes of greatness this season, he's been disappointing on the whole. He'll look to get back in the win column next week against the Phillies.