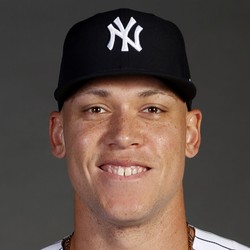 Staying healthy is a skill, and it's one that Aaron Judge hasn't possessed over the past couple of seasons. Could his size contribute to that? He's missed significant portions of the past two seasons, and he was dealing with an injury that caused his stock to drop during draft season. There's no denying the power and overall contributions that he brings, but he, like teammate Giancarlo Stanton, gives owners pause about taking them thanks to durability concerns. The tried and true rule is to not take injured players in the draft as there is enough risk baked into players already. Pass on Judge unless he has a clean bill of health.

Judge has a stress fracture in his rib, which showed "slight improvement" based on a CT scan in mid-April. But he is also dealing with a collapsed lung, and there is still no timetable for when he may be ready for baseball activity. Even with the postponement of the season, there's no guarantee that Judge will be ready to play at any point this season. Draft him with a heavy dose of pessimism and you should be fine.

Judge again missed 50+ games in 2019. While he is healthy, we are still looking at a 40+ homer pace with tons of runs and a batting average that won't kill fantasy owners, but with a second round ADP, the risk may be a little bit too much.

Has played over 112 games once in four year. Very good player, but not taking on that injury risk in the second or third round.

Michael Petropoulos - BRoto Fantasy19 weeks ago
Who Should I Draft?
Do Not Sell
Are you looking to contact Customer Support about a subscription or account related question?
Yes
No, I'm a California resident looking for the California Consumer Privacy Act form