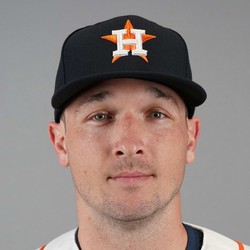 Bregman's multi-position eligibility makes him an attractive target in the second round, and he is a first-round pick in points leagues. You shouldn't expect 41 homers again from him, as his home ballpark aided him in reaching those numbers with his launch angle. Ten homers is achievable for Bregman, and he offers all-around production that makes him worthy of a selection here.

Thanks to his 122 runs and 41 homers, Bregman outperformed Story, Turner and Lindor last year so you might consider him at #6 overall once Bellinger is gone but his lack of steals makes his ceiling a bit lower than each of those other first rounders.

Advanced analytics say last season's power was a mirage. On top of that, the ball may be dejuiced, he won't be cheating anymore, and will likely lead the league in HBPs. Going to pass at current ADP.

Michael Petropoulos - BRoto Fantasy20 weeks ago
Who Should I Draft?
Do Not Sell
Are you looking to contact Customer Support about a subscription or account related question?
Yes
No, I'm a California resident looking for the California Consumer Privacy Act form