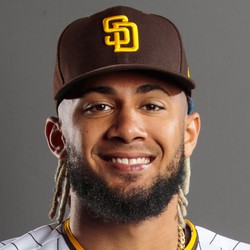 Fernando Tatis Jr. is one of the more polarizing players for draft season. When we revisit this article next year, we'll either be looking at Tatis as a top-five pick or as a source of debate over how far he should fall after his disappointing second year in the bigs. We know the differential with his expected stats, but do we talk about his plate discipline enough? He had a 29.6 K% last year, with only an 8 BB%. The walk rate is passable, but if Tatis keeps striking out at that rate, it's going to hurt his overall game. Suddenly, you're looking at a guy with 180 strikeouts who's hitting .260. The power/speed combo that he brings is nice, but you can get similar production later in the draft waiting on someone like Bo Bichette, who has a much safer floor for batting average.

Tatis was sensational in his half of season with 22 homers, 16 steals and a .317 batting average but every underlying metric available to us screams significant regression. He is a strong source of power and speed but expect the BA to plummet.

This is high for such a young player with so little track record, but dual-threat HR/SB guys are running out at this stage in drafts. 20/20/.280 is a lock, 25/25/310 is possible and he qualifies at SS. I can't justify drafting a Non-Base stealing bat ahead of Tatis when he should provide 15-20 bases falling out of bed even if he was to miss 20 or so games due to injury. The floor is too high.

Chris Mitchell - FantasyData17 weeks ago
Who Should I Draft?
Do Not Sell
Are you looking to contact Customer Support about a subscription or account related question?
Yes
No, I'm a California resident looking for the California Consumer Privacy Act form