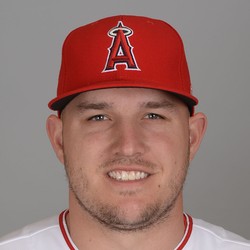 Potential verse reliability is the question here. Acuna and Trout are likely to have comparable home run totals while Acuna should steal more bases. We know what we're getting fromTrout and with Rendon in the lineup, maybe 2020 is a career year. It wouldn't surprise me to see Acuna have the better statistical 2020, but Trout's reliability gets my pick at #1.1.

Trout may not be the clear-cut number one player in fantasy this year, but that's of no fault of his own, as he's coming off one of his best seasons ever, with a career-high 45 home runs in just 134 games. If you were desperate to find a knock on Trout, it's that he hasn't topped 140 games in any of his last three seasons, and his 11 stolen bases last year tied his low in a single season. But that's all window dressing on a truly special player who is obviously a top-three pick at worst.

Although Mike Trout has missed some time, they've mostly been flukey injuries. Had he stayed healthy, we may have been talking about 55 homers with 15 steals and a .300 average. His consistency alone makes him the number one overall pick just ahead of Acuna.