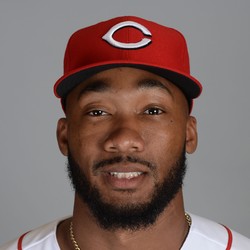 Amir Garrett allowed two runs on two hits and one walk in 0.1 innings Sunday, blowing the save against the Braves.

Garrett was summoned in the ninth with a two-run lead. Raisel Iglesias had been utilized several times this week, so Garrett was substituting on Sunday. He surrendered a two-run game-tying home run to Ronald Acuna, blowing the save. Garrett has a strong 2.79 ERA this season, with 61 strikeouts in 42 innings.