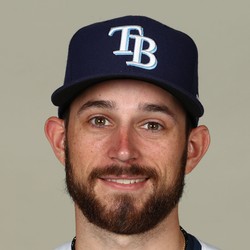 Lowe didn't have a high prospect pedigree nor did he perform in his rookie debut but he blew up last year for the Rays, hitting 17 homers and driving in 51 runs in just 296 at-bats. Don't be surprised if that grows to 25 and 10 with a solid batting average over a full year.

Brandon Lowe went 0-for-3 with two strikeouts in the Rays' loss to the Red Sox on Wednesday.

Lowe is hitting .350 with a 1.000 OPS so far this spring. The second baseman was on track to win American League Rookie of the Year before getting injured last season. He's a nice late-round option for fantasy teams in need of help at the keystone.