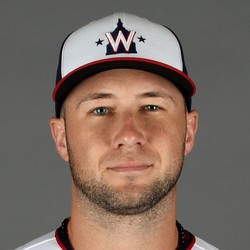 While Kieboom may not be the phenom Gavin Lux is considered to be, this is still a very polished young bat who went .303/.409/.493 in Triple-A last season. Much like Andrew Benintendi, though, he should be more useful in real-life than the bigs where his advanced eye is Kieboom's top calling card.

Carter Kieboom expected to be Nationals’ starting 3B

Kieboom will be the Nationals’ starting 3B and replace Ryan Zimmerman who opted out of the 2020 season. He could lose some at bats to Asdubal Cabrerra, but the 22-year-old will get first crack at the starting gig. Kieboom has upside and is worth a late-round flyer in standard leagues. He slashed .303/.409./.493 with 16 homers, 79 RBI, 79 runs and five stolen bases across 494 plate appearances in Triple-A last season.