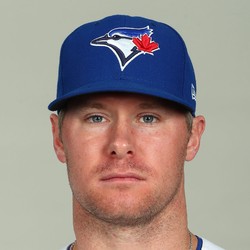 Chase Anderson gives up one run in spring start

Chase Anderson gave up one run on three hits with a walk over 3 2/3 innings Wednesday in Grapefruit League play against the Orioles.

Anderson was picked up from the Brewers in the off-season to bolster the team's pitching depth. Anderson is being counted on to break camp in the middle of the Jays' rotation and at least give the club consistent, serviceable innings and is only worth owning in deeper fantasy formats.